Welcome back to another edition of Elixir Alchemy! In our continued quest to find out what’s happening under the hood, we’ll take a deep dive into HTTP servers in Elixir.

The HTTP server we’re building is for educational purposes. We won’t build a production-ready HTTP server. If you’re looking for one that is, please try cowboy, which is the default choice of HTTP server in Elixir applications.

We’ll start with the fundamentals. HTTP is a protocol that commonly uses TCP to transport requests and responses between an HTTP client—like a web browser—and a web server.

Erlang provides the :gen_tcp module that can be used to start a TCP socket that receives and transmits data. We’ll use that library as the basis of our server.

In this example, we’ve created a TCP server that responds to every request with the current time in an HTTP response.

We start a socket to listen to the passed in port in start_link/1, and we’ll spawn accept/1 in a new process that waits until a request comes in over the socket by calling :gen_tcp.accept/1.

When it does, we put it into the request variable and create a response to send to the client. In this case, we’ll be sending a response that shows the current time.

An HTTP response contains a couple of parts:

We pass the body we built to send_response/2, which takes care of sending the response over the socket and finally closing the socket connection.

We spawn a process for each request so the server can call accept/1 again to accept new requests. This way, we can respond to requests in parallel, instead of subsequent requests having to wait for previous ones to complete being processed.

Let’s try it out. We’ll use a supervisor to run our HTTP server to make sure it’s restarted immediately when if it fails.

Our server implementation has a child_spec/1 function that specifies how it should be started. It states that it should call the Http.start/1 function with the passed options, which will return the newly spawned process’ ID.

Because of that, we can add it to the list of children managed by the supervisor in lib/http/application.ex.

We pass {Http, port: 8080} as one of our supervisor’s children to start the server at port 8080 when the application is started.

If we start the server and use our browser to send a request, we can see that it indeed returns the current time. 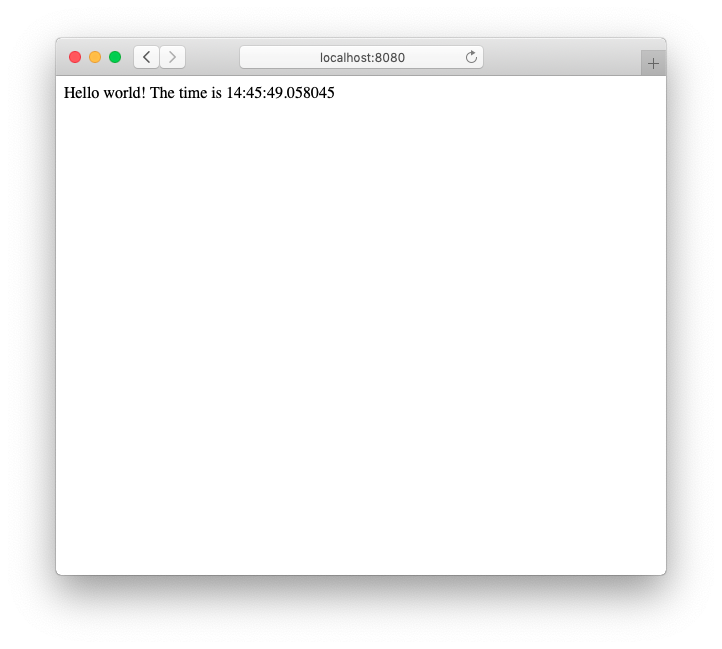 Now that we know how a web server works, let’s take it to the next level. Our current implementation has the response hard-coded into the server. To allow our web server to run different apps, we’ll move the app out into a separate Plug module.

The CurrentTime module defines a call/2 function that takes the passed in %Plug.Conn struct. It then sets the response content type to “text/html” before sending the “Hello world!” message—together with the current time—back as a response.

To make sure our web server can communicate with our web application, we need to build a %Plug.Conn{} struct to pass to CurrentTime.call/2. We’ll also need to turn the sent response into a string that our web server can send back over the socket.

To do this, we’ll create an adapter that handles the communication between our Plug app and our web server.

Instead of responding directly from Http.accept/2, we’ll use our adapter’s dispatch/2 function to build a %Plug.Conn{} struct and pass that to our plug’s call/2 function.

In the %Plug.Conn{}, we’ll set the :adapter to link to our Adapter module, and then pass the socket the response that should be sent over. This ensures that the Plug app knows which module to call send_resp/4 on.

Our adapter’s send_resp/4 takes the socket connection, the response status, a list of headers and a body, which are all prepared by the Plug application. It uses the passed in arguments to build the response and calls out to Http.send_response/2 that we’ve implemented before.

Instead of starting Http in our application module, we’ll start Http.PlugAdapter, which will take care of setting the plug, preparing the dispatch function and starting the web server.

Since we now handle requests in our Plug, we can remove most of the code in Http.accept/2. The Http.start_link/2 function will now receive the dispatch function from the adapter, which is used to send the request to in Http.accept/2.

Running the server again, everything still works exactly as before. However, our HTTP server, web application and Plug adapter are now three separate modules. 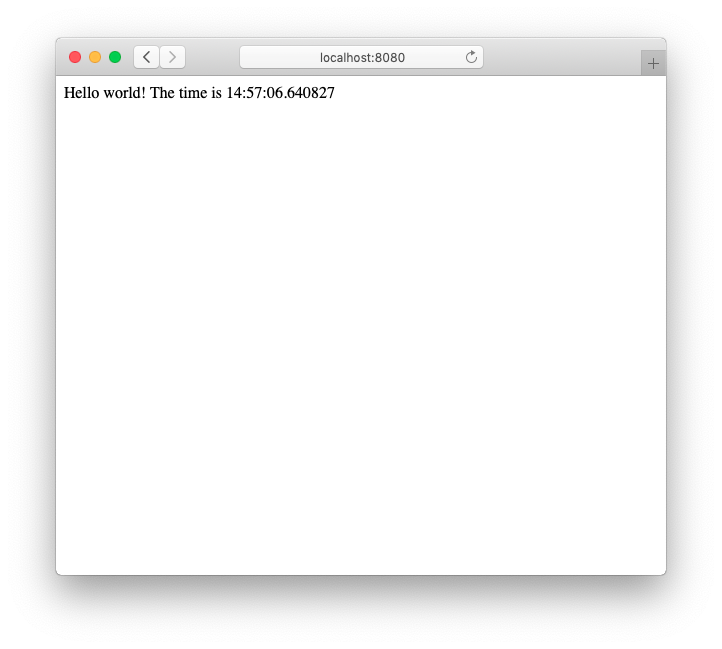 Because our server is now separate from our adapter and web application, we can swap the Plug out to run another application on the server. Let’s give that a shot.

In our mix.exs file, we add :plug_octopus as a dependency.

We then swap CurrentTime for Plug.Octopus in our Http.Application module. Starting the server and visiting http://localhost:8080 now shows an octopus! 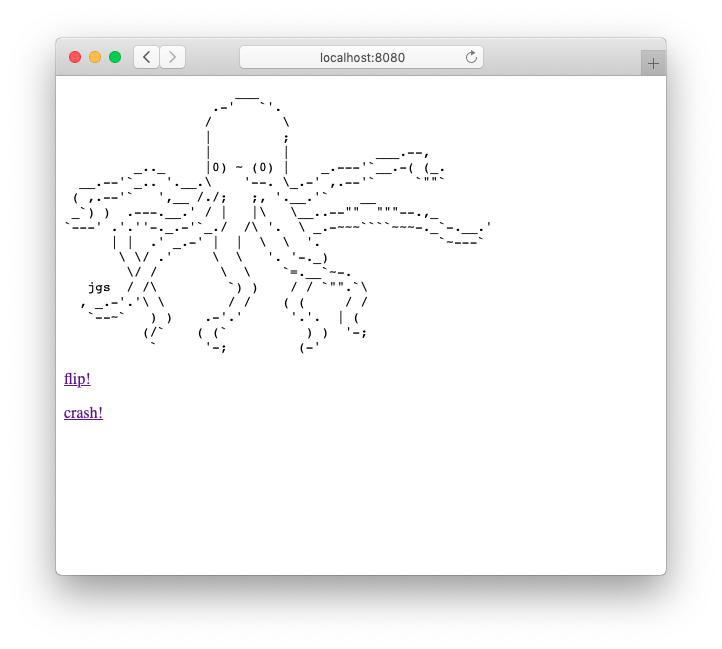 However, clicking the flip! and crash! buttons doesn’t do anything and any URL that’s called shows the same page. That’s because we skipped over parsing the requests altogether. Since we don’t read the requests, we’ll always pass the same response back. Let’s fix that.

To read requests, we’ll need to read the response from the socket. Thanks to the http_bin option that we’re passing when calling :gen_tcp.listen/2, the request is returned in a format we can pattern match on.

The Http.read_request/2 function takes a socket connection and will be called from the dispatch function. It will keep calling :gen_tcp.recv/2 to accept lines from the request until it receives an :http_eoh response, indicating the end of the requests headers.

We match on the :http_request line, which includes the full request path. We’ll use that to extract the path and URL parameters later. We’ll also match on all :http_header lines, which we convert to a list we can pass to our Plug application later.

We call Http.read_request/1 from Http.PlugAdapter.dispatch/2. Having the full_path, we can extract the path_info (a list of path segments), and query_string (all URL parameters after the “?”). We add these to the %Plug.Conn{} to have our Plug app handle the rest.

Restarting the server, we can now flip and crash the lobster. 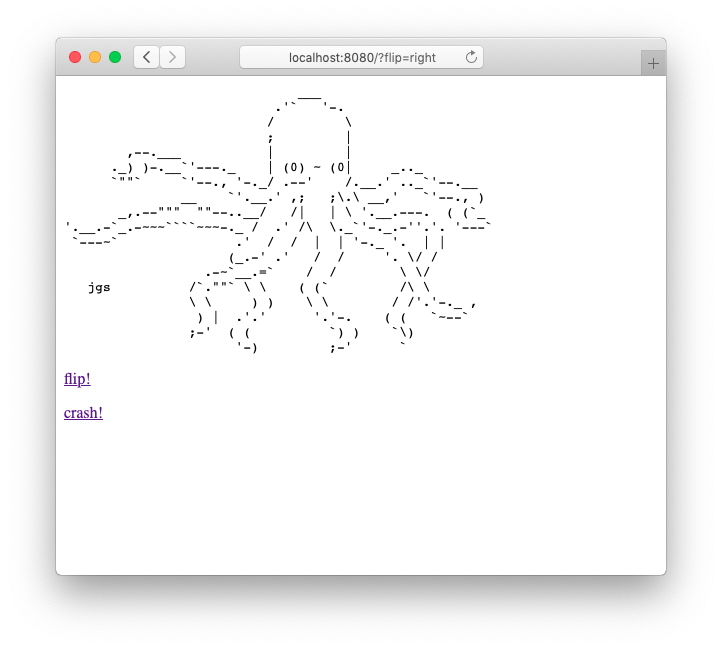 A Minimal Web Server Example that flips and crashes

With everyone in place, and no screws on the floor, our project to look into HTTP servers in Elixir is done. We’ve implemented a web server that extracts data from requests and used it to send a request to a Plug application. It even has concurrency included: since each request spawns a separate process, our web server can handle multiple concurrent users.

There’s more to HTTP servers than we’ve shown in this article, but we hope implementing one from the ground up gave you some insight into how a web server could work.