Performance monitoring is an important part of running a successful application. One of the most basic ways to tell the performance of something is to measure the duration each time it happens and distill statistics from it.

The mean or average of a collection of values is a good start to see how good or bad something behaves. It is calculated by summing all the values under consideration and then dividing by the number of occurrences.

In Ruby, this is what calculating the mean response time would look like:

Note: In the example, for a more accurate result when dividing, we cast the total duration value to a Float. Otherwise, Ruby would round down to the nearest Integer, returning 4 instead.

Another useful statistic is the median. While it sounds similar, there’s a difference between the mean and median of a collection of values.

The median is the value separating the upper half of a set from the lower half of the set.

This statistic is a good way of seeing if there is a huge skew in data or a long tail.

The mean for the durations above would be 335.83 because of the single outlier of 2000ms. The median, which is only 3.5, indicates that there is a skew.

By calculating both the mean and median of a dataset, you can figure out if there are any large outliers or a long tail.

The Problem with Mean

While mean and median are good indicators of performance, they don’t tell the whole story. If you request a webpage ten times, the mean could be very low, but one or more requests can still take a very long time to complete.

The image below shows the 99th (blue) and 90th (green) percentiles and the mean (red) for a certain action in AppSignal. You can see that the 99th and 90th are quite far from the mean and there are some spikes. This means that while your average customer has a good experience, every once in a while there’s a user who has to wait almost twice as long for the page to render. Ideally, you would want to get all these values as close to each other as possible, creating a more consistent experience for all your users. 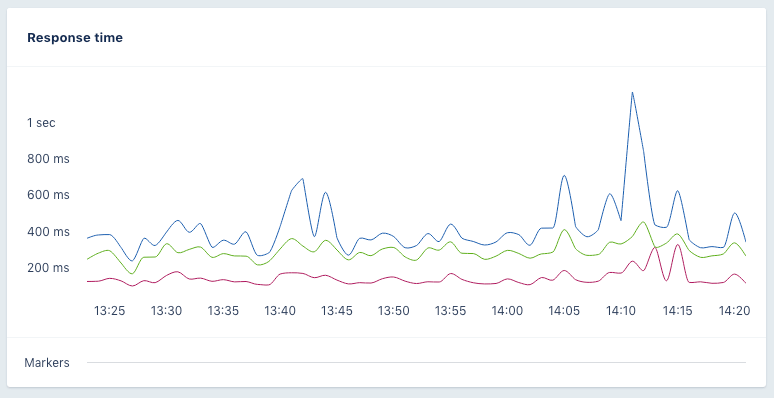 For example, given the following duration set where 10 customers request a page with a duration between 100 milliseconds and 1 second.

This would result in a mean of just 190ms while one user had a very bad experience of a 1 second response time. When only tracking the mean, it’s easier to think your website has great performance, while in reality every once in a while a user has a terrible experience.

The example above is only for 10 requests, but imagine if you had a thousand requests per day, that would mean a hundred of those users had a terrible experience.

To give a better idea of the distribution of the values, we use percentiles. Percentiles are similar to the median - a number that signifies a point in the dataset where half of the set is below the number and half of it is above. Percentiles are similar in the sense that the 20th percentile means that 20% of the numbers in the dataset are below that number.

Given the following (sorted) set:

A very naive Ruby implementation would look like this:

This percentile function looks very similar to our median calculation and in fact, the median is the same as the 50th percentile.

AppSignal uses the statistics above to generate performance metrics for your Application. We do not just rely on the mean/average but calculate the 90th and 95th percentiles to show outliers that give a better idea of the distribution of your requests. Find out more on our performance tour page.

Because of the way percentiles and averages are calculated, it’s sometimes possible to have the 90th percentile dip below the mean, for example, given the following dataset:

That’s it for now! In another post, we’re going to talk about how we efficiently store and calculate percentiles for all our customer’s requests using Quantiles. If you have any questions or remarks about statistics and APMs, error tracking or performance monitoring, hit us up on Twitter @AppSignal or via email.