Web servers, and HTTP in general, might seem difficult to understand. How does the browser format a request, and how does the response get sent to the user? In this Ruby Magic episode we’ll learn how a to build a Ruby HTTP server in 30 lines of code. When we’re done, our server will handle HTTP GET requests and we’ll use it to serve a Rack app.

How HTTP and TCP work together

TCP is a transport protocol that describes how a server and a client exchange data.

HTTP is a request-response protocol that specifically describes how web servers exchange data with HTTP clients or web browsers. HTTP commonly uses TCP as its transport protocol. In essence, an HTTP server is a TCP server that “speaks” HTTP.

To connect to our server, we’ll need a TCP client. This example client connects to the same port (5678) and uses server.gets to receive data from the server, which is then printed. When it stops receiving data, it closes the connection to the server and the program will exit.

When you start the server server is running ($ ruby tcp_server.rb), you can start the client in a separate tab to receive the server’s message.

With a bit of imagination, our TCP server and client work somewhat like a web server and a browser. The client sends a request, the server responds, and the connection is closed. That’s how the request-response pattern works, which is exactly what we need to build an HTTP server.

Before we get to the good part, let’s look at what HTTP requests and responses look like.

A basic HTTP GET request

The most basic HTTP GET request is a request-line without any additional headers or a request body.

The Request-Line consists of four parts:

The server will respond with an HTTP response, which may look like this:

This response consists of:

Enough talk. Now that we know how to create a TCP server in Ruby and what some HTTP requests and responses look like, we can build a minimal HTTP server. You’ll notice that the web server looks mostly the same as the TCP server we discussed earlier. The general idea is the same, we’re just using the HTTP protocol to format our message. Also, because we’ll use a browser to send requests and parse responses, we won’t have to implement a client this time.

After the server receives a request, like before, it uses session.print to send a message back to the client: Instead of just our message, it prefixes the response with a status line, a header and a newline:

Like before, it closes the connection after sending the message. We’re not reading the request yet, so it just prints it to the console for now.

If you start the server and open http://localhost:5678 in your browser, you should see the “Hello world! …”-line with the current time, like we received from our TCP client earlier. 🎉 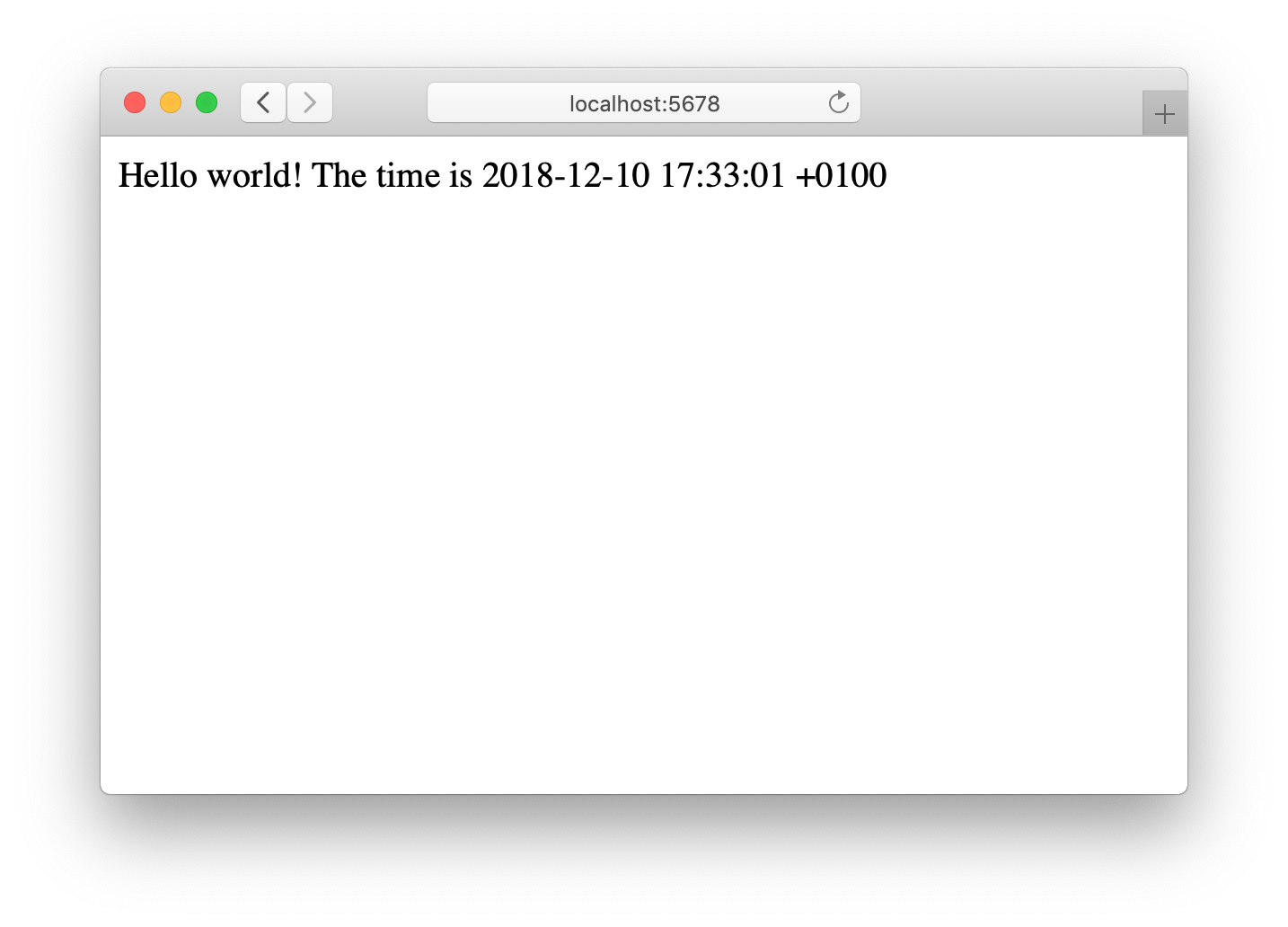 Until now, our server has been returning a single response for each request. To make it a little more useful, we could add more responses to our server. Instead of adding these to the server directly, we’ll use a Rack app. Our server will parse HTTP requests and pass them to the Rack app, which will then return a response for the server to send back to the client.

Rack is an interface between web servers that support Ruby and most Ruby web frameworks like Rails and Sinatra. In its simplest form, a Rack app is an object that responds to call and returns a “tiplet”, an array with three items: an HTTP response code, a hash of HTTP headers and a body.

In this example, the response code is “200”, we’re passing “text/html” as the content type through the headers, and the body is an array with a string.

To allow our server to serve responses from this app, we’ll need to turn the returned triplet into a HTTP response string. Instead of always returning a static response, like we did before, we’ll now have to build the response from the triplet returned by the Rack app.

To serve the response we’ve received from the Rack app, there’s some changes we’ll make to our server:

Until now, our server has been ignoring the request variable. We didn’t need to as our Rack app always returned the same response.

Rack::Lobster is an example app that ships with Rack and uses request URL parameters in order to function. Instead of the Proc we used as an app before, we’ll use that as our testing app from now on.

Opening the browser will now show a lobster instead of the boring string it printed before. Lobstericious! 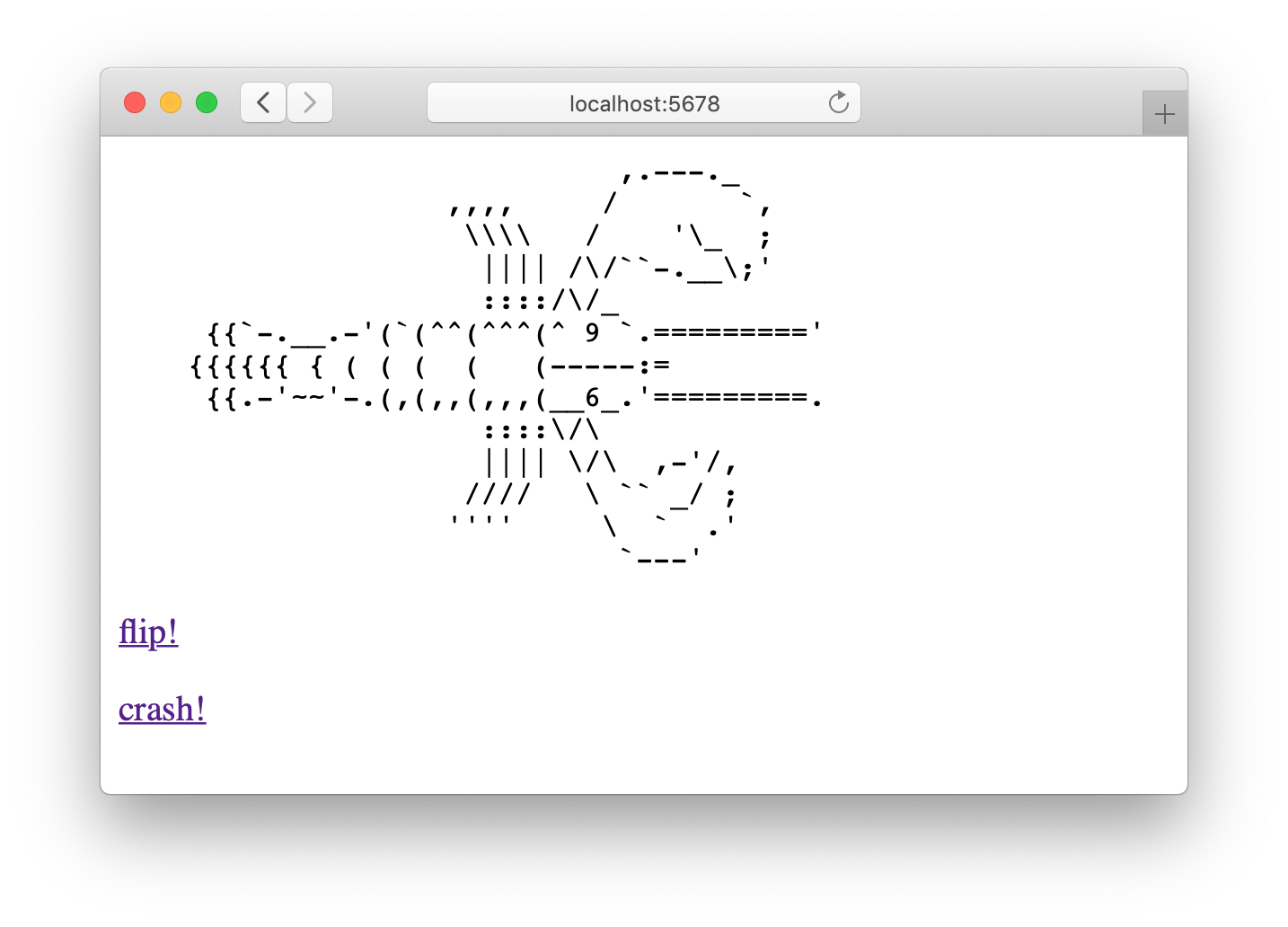 The “flip!” and “crash!” links link to /?flip=left and /?flip=crash respectively. However, when following the links, the lobster doesn’t flip and nothing crashes just yet. That’s because our server doesn’t handle query strings right now. Remember the request variable we ignored before? If we look at our server’s logs, we’ll see the request strings for each of the pages.

The HTTP request strings include the request method (“GET”), the request path (/, /?flip=left and /?flip=crash), and the HTTP version. We can use this information to determine what we need to serve.

We’ve just scratched the surface of implementing a HTTP server, and ours is only 30 lines of code, but it explains the basic idea. It accepts GET requests, passes the request’s attributes to a Rack app, and sends back responses to the browser. Although it doesn’t handle things like request streaming and POST requests, our server could theoretically be used to serve other Rack apps too.

This concludes our quick look into building an HTTP server in Ruby. If you want to play around with our server, here’s the code. Let us know at @AppSignal if you want to know more, or have a specific question.

If you enjoyed this article, subscribe to the Ruby Magic newsletter: a (roughly) monthly po®tion of Ruby.