Shortly after we added the very first graphs to the AppSignal interface, we added deploy markers. These markers are the little dots at the bottom of each graph that indicate when a new revision of an application was deployed. They’re a great way to compare deploys with each another and see if the new version increased or decreased application performance.

But, deploys aren’t the only things that impact the behavior of an application. Spinning up additional dyno’s, getting Product Hunted and other external factors greatly affect how your app operates. Until now though, there was no way to track these events in AppSignal.

Our new Custom Markers provide a new way to add more context to graphs, allowing you to add annotations yourself. Create a marker for scaling operations, when there was a sudden spike in traffic or when a database was acting up.

Sending the following JSON payload in a POST request to the custom markers endpoint (https://appsignal.com/api/<site_id>/markers.json?token=<token>) will result in a new marker being created:

Then hover over the marker in the interface to read the message: 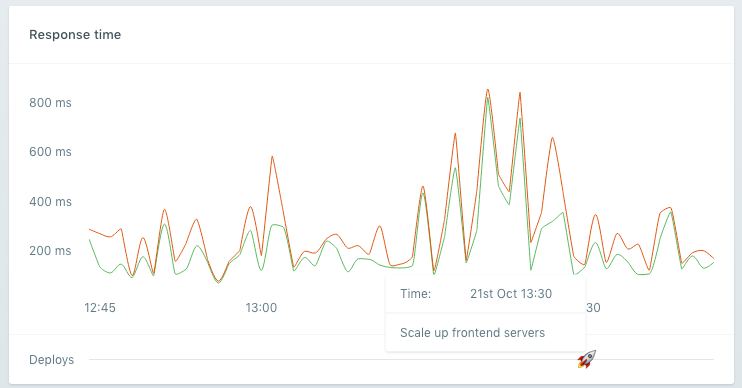 For more information about how to send Custom Markers or deploy markers to AppSignal, check out the documentation.